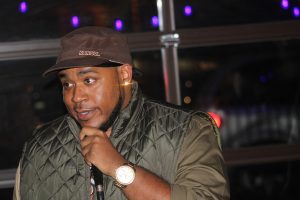 Lombard
Illinois
(630) 432-5117
TJStokesComedy@gmail.com
TJ Stokes is a comedian from Chicago who has performed in several venues in and around the Chicagoland area. These venues include The Laugh Factory, Zanies Chicago, and a sold out crowd at the Madison Street Theatre in Oak Park. Most recently, TJ has started producing a weekly show at My Buddy’s every Wednesday. This has also lead to him being a part of a group of producers for a new show at The Laugh Factory starting in March! TJ was also featured on the comedy album “Laughter is Good For the Soul” which debuted as the #1 comedy album on iTunes! While TJ is a comedian, the core of everything he stands for is positivity, togetherness, and most of all, spreading love to everyone.