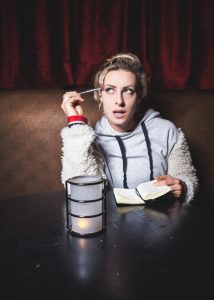 Los Angeles
California
Maxi Witrak is an open book with a few pages torn out. After a sheltered upbringing complete with show ponies (that’s right, Maxi was a World Champion Equestrian) and controlling mom-ager, her stand-up comedy speaks about ditching privilege and going after teenage dreams immediately after graduating college. Now she’s a drummer for a pop punk band, with the fashion sense of a 17 year old raised by brothers. This part-tomboy, part grunge-goddess from Seattle faces adulthood with unbridled disappointment. Inspired by Tig Notaro and Whitney Cummings, she skips the small talk. She’s the edgy-cated Johns Hopkins grad who left the front of the class to check out the back of the bus. Her credits include being a Finalist in the US Comedy Contest and appearing in Blazing Saddles (2015), as well as starring in her own webseries “TrainTraks with Maxi Witrak.”