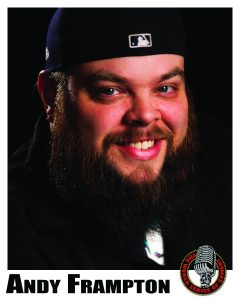 Chesapeake
West Virginia
Andy Frampton is a West Virginia based comedian with 8 years of performing under his belt. His comedy comes through a view from being brought up in a small town and the subsequent breaking free from it. He has performed in clubs such as Comedy Off Broadway in Lexington KY, Wiley's in Dayton OH, and McCurdy's in Sarasota FL, along with countless smaller venues across the Midwest and eastern US. He has also made the Top 101 in the World Series of Comedy the last two years. Through comedy, he hopes to do two things. Get you to laugh and his parents to not be disappointed in him. With any luck, he'll do both.