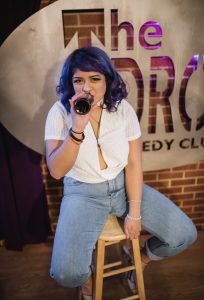 Elkhart
Indiana
5743705793
ssloser24@gmail.com
Jenni Rodriguez has been disappointing her friends and family after emerging onto the comedy scene in 2019. Since then, she has showcased at Grand Rapid’s LaughFest, featured as Wonder Woman in DIY Comedy’s Roast of Batman and opened for headliners such as Dan West, Alan Ford and Tyler Fowler. Best described as dark, aggressively sexual and a cry for help, her humor can be sweet and sometimes it can be sour but she is funny every time.