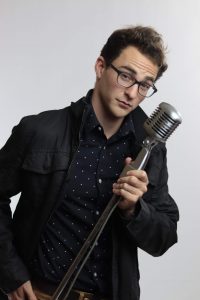 Albuquerque
New Mexico
Originally a sketch writer and Improv performer, Bryan Valencia is no stranger to the stage. Hailing from Albuquerque, New Mexico, he was the head writer at Comedy Well Done and Jokes4Miles, where he held the honor of sketch writing alongside comedy pioneer Ritch Shydner. Over the past three years, Bryan has taken his comedy to over 30 states and multiple international comedy festivals, all while raising money for pediatric cancer research. From collegiate degrees in Creative Writing, Journalism and Dance Studies to dedicated years of martial arts, music, and athletic practice, Bryan has combined his talents over the past few years into a one-of-a-kind, style that teeters on the cusp of humor, sentiment, and absurdity. Simply put - he is a weirdo.