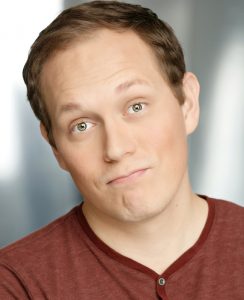 La Crescenta
California
Seth Lawrence comes from a loving family in Orem, Utah, went to law school and worked as an attorney in North Carolina, is married with three kids, and is a member of The Church of Jesus Christ of Latter-day Saints. So, how did he end up in standup comedy? Funny story... Seth specializes in hard-hitting clean comedy, largely based on stories from his life. He uses his innocent look and charm to get away with making fun of believing in God, not believing in God, being white, not being white, having a job, not having a job, having kids, not having kids, being married, not being married...you get the idea. He has performed at Flappers in Burbank, The Ice House in Pasadena, The Comedy Store in Hollywood, and the Hollywood Improv. Seth produces and hosts a clean comedy show called Clean Up Comedy that gives comedians a space to work on their late night TV audition material in front of normal people. He is also performing in monthly shows at Fort Irwin, CA, trying to make serving our country a bit more tolerable for the troops and their families. Go see him perform. You will laugh...and if you don't, you at least won't feel guilty.