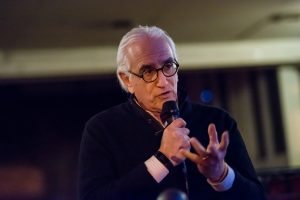 Washington, D.C.
Washington,D.C
Mark Palchick brings 7 decades of life 5 minutes at a time and says the things you wish you had thought up, but are glad it wasn't you that said it. He has opened for National acts including the Sklar Brothers and Robert Mac He is a graduate of the D.C. Improv Five Minutes to Funny and Robert Mac ABCs of Comedy Stand up classes. He is a frequent competitor at the DC Improv’s make up party as part of the Festivus Miracles sketch comedy group. He is the winner of the Starr Struck Comedy contest and has appeared in Showcases at: the Westside Comedy Club New York City; The Broadway Comedy Club New York City, Comedy Couch San Francisco, The Comedy Zone Charlotte NC, Wiley’s Comedy Club Dayton Ohio. He recently was the featured comic at Shakers on Clark Street in Chicago. In Washington DC he has appeared at the DC Improv, Busboys and Poets, DC Comedy Club, The Pinch, Sotto Lounge, Underground Comedy’s Ri Ra and Stand Up Comedy to Go. He is also the principal comic at Comedy Walks DC (www.comedywalks.com )a hysterical walk around historical sites-a stand up performance with the City as the Background