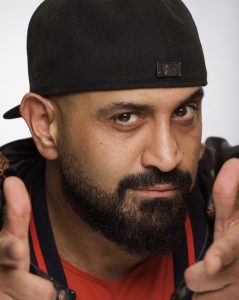 Detroit
Michigan
After a tour in the Marines, Mike Eshaq traded his rifle in for a microphone! Mike has a unique angle in his comedy being Middle Eastern, serving as a United States Marine and being a Muslim who can’t stop eating bacon. Some of his TV credits include 'Detroiters' on Comedy Central and 'Grace and Frankie' on Netflix. He just filmed his 15 min special for P Diddy’s REVOLT TV. Recent clubs he's performed at have been The Comedy Store, Hollywood Improv, Mark Ridleys Comedy Castle, Rick Bronson’s House of Comedy, Funnybone, Cleveland Improv, and The Dirty at 12:30 in Las Vegas! He's also a self taught filmmaker directing many short comedy sketches since 2004, like the award winning video "MTV Cribs - Arab American Style” and the web-series The Ed and Moe Show. He continues to create videos on his Instagram and YouTube pages. Mike also produced hit reality TV shows like Swamp People on History Channel. You can follow him at www.MikeFromDetroit.com