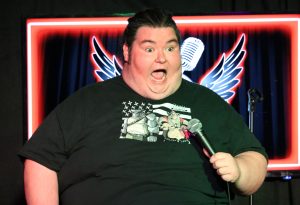 San Antonio
Texas
Some time ago,in a dimension called Texas… A Meteor struck a chemical plant, the blast swept through the land towards the chosen Jester. The Prophecy of legend, came to be. This is how Alex Ansel was created. Overcoming Childhood obesity, and journeying into teenage obesity he was bestowed with the title of KOOL-AID. The Moniker was adopted to protect the ones closest to him. He is History’s OTHER Failed Artist/Charismatic Speaker. However Alex uses his skills of wit in frustrating his school teachers to gain the delight and approval of his classmates. Upon completing his 12 years of Public Education, he became successful merchant at Circuit City bestowing “Moving Paintings” and “Music Chests” (Flatscreen TV’s and Surround Sound) to the masses. Destined for more, he sought an audience, any audience he could to make them tremble with glee and cheer. Many Accolades have been won by him, such as “Funniest in South Texas” “Best Live Performer” and “Best Comedian” just to name a few. He’s traveled coast to coast leaving his home of Texas to perform all over this great land with a World renown WWE Warrior, known as Jake “The Snake” Roberts. Alex has a new cause. Battling Boredom, 5 nights a week at The Treasure Island Casino the Champion of his own show, “Squeezed: The Funny Side of Losing Weight”.